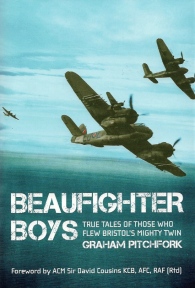 Beaufighter Boys was launched on 13 July at the Flying Legends Air Show at Duxford.    This book is a departure from the Cold War for Grub Street’s ‘Boys Series’.  I researched this book twenty years ago for a different project when Beaufighter aircrew gave freely of their stories, which ranged from complete memoirs to brief anecdotes together with many unique photographs.  The book traces the various roles of Beaufighter squadrons operating in all theatres of World War Two operations.  From UK bases, through NW Europe, North Africa, Malta and the Mediterranean, to the Far East and the SW Pacific.  Three chapters are devoted to the operations of the RAAF and the numerous chapters outline the experiences of crew from the RCAF, the RNZAF in addition to RAF crews.

I was full of admiration for the all the ‘Beaufighter Boys’ I met and who helped with this project and it is to them that the book is dedicated.