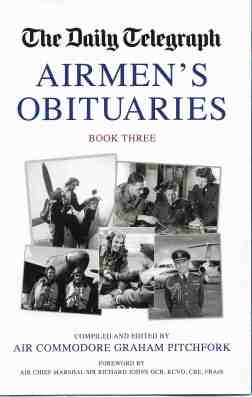 This volume includes 91 obituaries of airmen and women published in the Daily Telegraph between 2007 and the end of 2017.  Each entry has a photograph of the subject.   With a focus  on personnel from a number of air forces, including RAF, USAF, and the Commonwealth air forces, as well as some civilian aircrew, each one is a fascinating account of a distinguished life.

Those featured include senior RAF officers, Battle of Britain pilots, escapers and evaders and the courageous ladies who flew with the Air Transport Auxiliary (ATA).  Gallant Poles, Czechs and Frenchmen are covered in addition to Brigadier General Paul Tibbets who dropped the first atomic bomb and a number of USAF fighter “Aces”.  Those engaged in aviation medicine, aero engineering and the RAF Regiment are recognised.

In his Foreword, Air Chief Marshal Sir Richard Johns, a former Chief of the Air Staff, concludes: “I have resisted the temptation to try to name names in this foreword with attribution of aeronautical achievements to individuals.  It’s simply impossible to judge objectively their comparative value and it is for this reason that the book offers the reader many surprises that merit consideration and admiration in equal measure.  Graham Pitchfork’s industry in compiling each and every one of the obituaries most certainly merits our congratulations and thanks”.