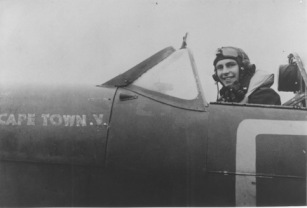 Percy Beake flew Spitfires in the latter stages of the Battle of Britain and on many escort missions and sweeps over northern France in the summer of 1941.  He went on to fly Typhoons, initially with 183 Squadron and then in command of the rocket-firing 164 Squadron.  He was heavily involved in operations in support of the operations for D-Day and the Normandy campaign when he was awarded the DFC.