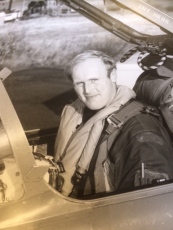 John Cockburn was a leading British test pilot who made a major contribution to the development of aircraft avionics, including the air intercept radar for the Lightning fighter and the terrain following radar later introduced into the Tornado strike aircraft.  His services to the aviation industry were recognised by the award of a Queen’s Commendation for Valuable Service in the Air and his appointment as OBE.