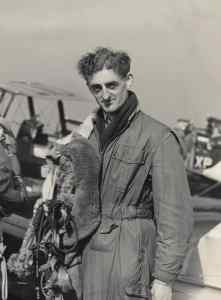 Tony Farrell was 100 years old when he died.  During a flying career that spanned almost 50 years, he accumulated over 16,000 flying hours.  After a long spell as an instructor, he completed 80 operations flying the Mosquito with Bomber Command’s Pathfinder Force. Using the radar bombing aid ‘Oboe’ he marked targets for the following main bomber force.  His final target was Hitler’s Eagle Nest at Berchtesgaden.  His wartime service was recognised by the award of the DFC and the AFC.  After the war he returned to civilian life and was a flying instructor, first with Marshall’s of Cambridge, then with Air Service Training and the College of Air Training at Hamble.