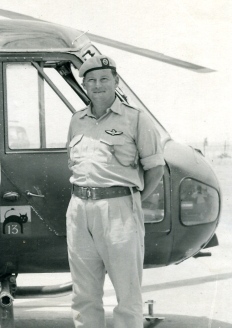 Major Chris Crouch led a flight of Scout helicopters supporting a troop of SAS soldiers involved in a fierce engagement against dissidents in Aden.  Throughout a long day, Crouch controlled his helicopters as they carried out reconnaissance sorties and redeployed troops to surround the enemy group.  His helicopter was hit on three separate occasions by small arms fire.  He was awarded a DFC.  During an earlier tour in the Malayan Emergency, he flew Auster AOP aircraft and was twice mentioned in despatches.