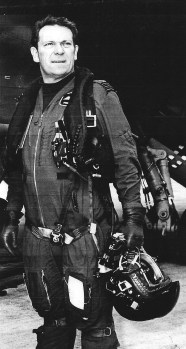 Fred Trowern was a very experienced fighter ground attack pilot who played an important role during the Falkland’s War of 1982.  He was the air staff officer appointed to the Land Force Commander (Maj Gen J. Moore RM).  On arrival in the islands he transferred to HMS Fearless in San Carlos Water, ‘ bomb alley’, and advised on the use of RAF assets and on offensive support operations in particular.  He went ashore to Goose Green and finished in Stanley at the time of the Argentinian surrender.  He was appointed OBE.

Earlier in his career, he was one of four RAF pilots who evaluated the Kestrel vertical take off and landing fighter that became the Harrier.  He saw service in Aden flying Hunters and later commanded Jaguar units