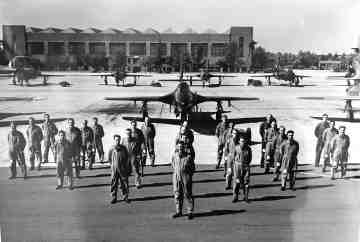 Air Commodore Roger Topp gained worldwide attention with his leadership of the RAF aerobatic team “The Black Arrows”.  When he assumed command of No 111 Squadron (Treble One) in 1955 the squadron was converting to the Hawker Hunter.  He led a formation team, which became the official RAF aerobatic team.  For the Farnborough 1958 Airshow, he led twelve of his all-black Hunters, and 10 Hunters drawn from other Fighter Command squadrons, in a loop, a breathtaking manoeuvre that thrilled the crowds and one that has never since been repeated.  It thrilled a generation of young men and schoolboys.  Topp’s innovative ideas were accepted by other teams and led to the formation of the RAF’s world famous Red Arrows. 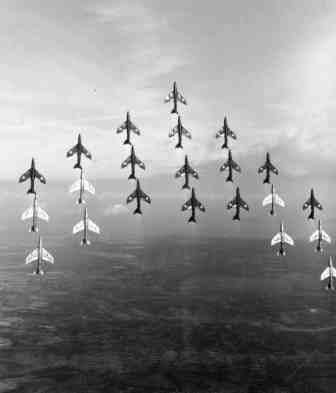 Topp had joined the RAF during the war but by the time he completed his training as a pilot, there was no demand for more and he volunteered to fly gliders and piloted a Horse on the mass airborne assault on the River Rhine in March 1945 – Operation Varsity.  Topp attended ETPS and served three tours as a test pilot.  He was awarded the AFC three times.  Later he commanded RAF Coltishall during the early Lightning period and made a major contribution to the specification and development of the Tri-National MRCA project, which was developed into the Tornado.