With the conclusion of the long-running series relating the stories of the airmen holders of the Victoria Cross, a new series Above and Beyond has started in the September issue of FlyPast.  This first article provides the background to the Distinguished Flying Cross and the Distinguished Flying Medal.  It highlights the creation and the development of the criteria for the award of the two decorations for gallantry in the air.  The article is illustrated by examples of both immediate and non-immediate awards and includes the first award of the DFC to a female and the only post-war award of the DFC and two Bars.

Each monthly issue of FlyPast will focus on one individual and describe the events that led to the award of the decorations.

The Royal Mail have issued a series of four stamps to commemorate the 50th Anniversary of the Harrier Jump Jet.  The stamps form part of a an issue celebrating British Engineering.  The Harrier issue includes a medallion and an insert describing the development and operational use of the iconic jet, which is lavishly illustrated with photographs and a timeline highlighting the milestones in the aircraft’s service with the RAF ands the Fleet Air Arm.  I was pleased to be invited  for the second time (see RAF 100) to provide all the narrative.

This article in the May issue outlines the career of Wing Commander ‘Babe’ Learoyd who was Bomber Command’s first VC.  A pre-war regular pilot, he flew an operational sortie in his Hampden bomber of 49 Squadron on the morning that war was declared.  There was little activity during the “Phoney War” but operations intensified after the German occupation of the Low Countries and France in May/June 1940.  A target of special importance was the Dortmund-Ems Canal, used for the build-up of shipping and barges for the planned invasion of Britain.  On the night of August 11/12 a force of Hampdens attacked a key aqueduct, which was heavily defended.  Two of the five aircraft were shot down.  Learoyd was the last to attack and had witnessed the earlier attacks.  Despite the intense opposition he bombed successfully from 150 feet.  He then nursed home his badly damaged aircraft and waited until daylight to make a safe landing.  He was awarded the VC.  He later commanded a Lancaster squadron and left the RAF at the end of the war.  He died in January 1996. 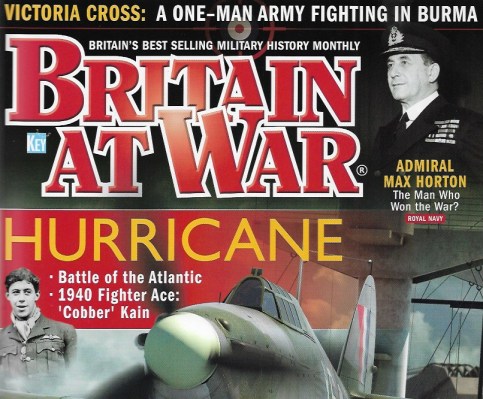 This month’s magazine Britain at War features a long and lavishly illustrated article  that relates the brief and gallant life of the RAF’s first fighter ‘ace’ (five victories) in World War Two.  New Zealander ‘Cobber’ Kain was a Hurricane pilot serving with No. 73 Squadron, which moved to France in September 1939 as apart of the Advanced Air Striking Force.  Kain’s first success came on 8 November when he shot down a Dornier 17 reconnaissance aircraft.  By the time the German’s invaded the Low Countries and France on 10 May 1940, Kain had already achieved ‘ace’ status.  In the fierce fighting that followed, his score mounted to at least seventeen.  Exhausted, he was ordered home and on 7 June he took off from a landing strip and turned to make a farewell flypast.  He had completed two slow rolls when he crashed and was killed.  At the time of his death he was the RAF’s most successful fighter pilot.  He was twenty-one years old.

This month’s edition of Flypast pays tribute to one of the country’s finest pilots and a true gentleman – the legendary Neville Duke, fighter ace and test pilot.   Ken Ellis and I trace his highly successful career as a fighter pilot in the skies over UK and in the Middle East and as a test pilot with Hawkers.  One of the RAF’s top-scoring ‘Aces’ with twenty-seven confirmed victories and awarded the DSO and DFC & 2 Bars, he was one of the RAF’s most highly decorated fighter pilots. After leaving the RAF he became one of the best known test pilots in the world and will always be permanently associated with the beautiful Hawker Hunter and his displays at the Farnborough Air Shows.

In the September issue of Britain at War, I have written an article given the title ‘Holding the Line – At All Costs’.  It relates the story of Sergeant Norman Gerrish and his colleagues of No. 2807 Squadron of the RAF Regiment in their epic battle to take and hold the crucial airfield of Meiktila in Burma during the advance of Lieutenant General Sir William Slim’s 14th Army to Rangoon.

Gerrish’s inspirational leadership resulted in the immediate award of the Military Medal for gallantry.  The citation highlighted his ‘courage, determination and leadership in holding two companies of the Japanese and for their ultimate defeat’. 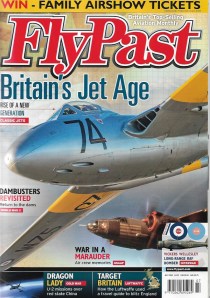 Throughout the RAF’s Centenary year, Flypast magazine is running a series of features commemorating significant activities that reflect the RAF’s illustrious history.  In the latest issue is an article I have written on the RAF’s record-breaking long-distance expeditions of the 1920s and 1930s.  The article discusses the earliest long-distance flights to India, to West Africa and to South Africa before outlining in detail, the record-breaking attempts by the Fairey Monoplane, which culminated in a non-stop to Walvis Bay, a distance of 5,309 miles.  The article concludes with a detailed account of the flight in 1938 of three Wellesleys of the Long Range Development Unit.

Two successfully completed the 7,159 miles non-stop flight from Ismailia in Egypt to Darwin in Australia in 48 hours and 5 minutes .