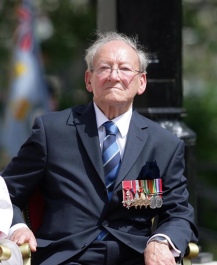 Doug Radcliffe flew as a WOP/AG in Wellingtons during the Second World War.  Flying in North Africa and Italy, he completed 30 bombing operations.  He will best be remembered for his devoted service as the Bomber Command Association Secretary, a post he held for over 30 years and for which he was appointed MBE. He made a significant contribution to the establishment of the Bomber Command Memorial in Green Park, which was dedicated by HM The Queen in 2012.