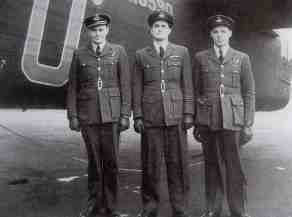 Ronnie Buckland was the pilot of a Halifax bomber when his life was saved by the cigarette case in his pocket.  On the bombing run to the target, a piece of shrapnel from exploding anti-aircraft fire pierced the aircraft and hit him in the chest.  Despite his wounds and bouts of unconsciousness, and with the aid of his crew, he managed to return to the UK and make a crash landing in Essex.  He was awarded an immediate DFC.  Two months later he returned to flying to complete 35 bombing operations.  Buckland is in the centre of the photograph.